While I was running yesterday morning, I realized how much of life is lived mindlessly while we wait for whatever it is we happen to be waiting for. (Click here to read post.)

Today while I was running, I realized where that thought came from. I had a moment where I thought I was going to meet my maker. Really!

This is what chased me when I was running on a trail along the river that doesn’t get a whole lot of traffic other than a person here or there, walking their dogs. Typically on a leash. And typically the leash in a person’s hand. Typically… 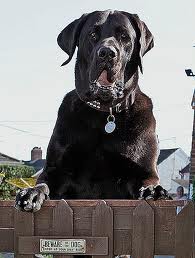 Yes, I thought I was seriously going to pee my pants!

I was running along, enjoying the birds, the trees, the water…the nature that surrounded me on all sides. I was in “the zone” that runners fall into. Rounding a corner, I saw this enormous black dog sniffing the ground, his leash trailing on the ground behind him, his master a few steps behind. Too many steps behind, because when the dog looked up and saw me, he had one thing on his mind. Me!

It looked like the dog straight from the movie The Sandlot, whose name was The Beast.

He came running at me, growling, his master running behind him (far behind him by now) calling desperately, “Vader! Vader!”

In a split second, thoughts rumbled like a freight train through my mind.

Vader? As in Darth Vader? I don’t think he was one of the good guys!

Is this how I’m going to go?

I quickly tried to think of what I was supposed to do, but my mind failed me.  And it was too late by now anyway. The Beast stopped right before he got to me and barked a warning.  I froze, covered my face with my arms and heard a scream that sounded like it was coming from me. And then I realized that it was, indeed, coming from me.

“Is he nice?” I managed to get out to the master who was still catching up. And when he didn’t answer me, even after asking again, I was sure I was a goner. The Beast jumped up on me, when he did his head was taller than mine. He growled, barked, I screamed again, and his master finally reached us, muttering a breathless, “sorry ’bout that.”

While the dog in The Sandlot appeared to be ferocious, it ended up licking the face of Smalls when he finally caught him. But I wasn’t about to take that chance and offer this dog my face to lick. My face is far from perfect, but I like it just as it is.

This morning when I was running, I did run along the trail again, hoping I wouldn’t be subjected to The Beast two days in a row. (I’m a slow learner.)  I met a woman walking her small, friendly dog, and she stopped me as I got to her. She said, “You sure had a ferocious dog after you yesterday. Looked like it was the dog from the movie The Sandlot!”

We talked for a moment, I told her I really like her dog, and waved my goodbye to finish my run.

View all posts by Rhonda